Prior to the 1870s, and the development of the northern coal fields, settlers living along Coal Creek eked out their living as farmers or merchants. The few communities existing along the front range were miles apart by stagecoach or horseback.

Throughout the 1860s, stagecoach companies delivered freight, mail, and passengers to destinations along the foothills. The Overland Stage traveled from Denver to Laramie each day, following much the same route as the present U.S. Highway 287. Contact with distant friends and relatives improved with the coming of the railroad to Erie in 1871. Even after its arrival, however, travelers heading to Longmont had to continue on by stagecoach or spring wagon. Those bound for Boulder detrained at the Erie terminal and boarded a stage for the final destination.

Reverend Richard J. Van Valkenburg of Erie, Weld County, is known far and wide and is deservedly esteemed in religious, fraternal, and civic circles. Van Valkenburg made his way to Colorado from Erie, Pennsylvania. Not only was he the founder of the Erie Methodist Church, but he helped organize the establishment of the Town, which was named for his place of birth, Erie, PA. He served Erie as Mayor, postmaster, police judge, president of the school board, and justice of the peace

The Town of Erie was officially established on November 16, 1874.

In Colorado, churches were outnumbered by saloons and parlor houses. In towns that didn’t have church buildings; services were held in school rooms, private homes, and if no other space was available, in saloons that would shut down for the services. Ministers traveled from one town to another (Circuit Riders) in all kinds of weather, sometimes preaching sermons in three or four mining camps or valley towns in one day.

R.J. Van Valkenburg comes to Colorado to regain his health; works in mines in the Central City vicinity.

R.J. Van Valkenburg and family settle in Erie and name the Town in honor of his former home of Erie, Pennsylvania.

Union Pacific decides to cross the Rocky Mountains through Wyoming, bypassing the rough mountain terrain of Berthoud Pass in Colorado to lay the 'most track in the least amount of time'.  In November 2019, Denver Pacific Railway incorporated under the laws of Colorado by the 'Board Trade' as established for this undertaking. Former Governor Dr. John Evans and David H. Moffat propose to build the 106-mile link between Denver and Cheyenne. Denverites subscribe to $300,000 in bonds, Arapahoe County votes for the $500,000 bond issue.

In 1869, Oliver Wise, his wife Adaline (Ada) and their three children came across the plains from Wisconsin to settle in Colorado. Oliver built a small log cabin and began to farm the land. In 1870, he was granted a U.S. Homestead Patent on the property and began building a permanent farmhouse.

Social interaction among early settlers was limited, and families traveled great distances to attend church, school, or grange meetings. Many relied on circuit-riding preachers to bring them the gospel once or twice a month. Such a man was Reverend Richard Van Valkenburg, civic leader and a founder of Erie, Colorado. Having spent many years as a Methodist preacher in the coal towns near Erie, Pennsylvania, the reverend thought it fitting to bestow that name on its western counterpart.

The original plat for Erie was filed in 1871, following the establishment of the Briggs Mine, the first commercial coal mine in Weld County. Until that time, surface coal had been delivered to its customers by horse and wagon.

It was also in 1871 that the Union Pacific Railroad extended a spur westward from Brighton on its main line between Denver and Cheyenne. Coal from the Erie deposits was needed to fuel their huge steam locomotives. The Boulder Valley Railroad, as it was called then, opened up the northern coal fields for development. Soon, coal from Erie mines was being shipped by rail to markets in Denver and as far east as Kansas City.

The Town of Erie was incorporated in 1874. 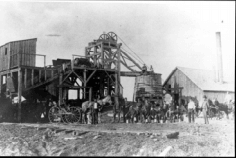 Mining was the most significant industry in nineteenth- and early twentieth-century Colorado. What spurred the advance of coal mining was the revitalization of metal mining in the late 1860s, coupled with the first railroad construction in Colorado. The impact of the railroads came first in the Northern Coalfield. In 1871, the Boulder Valley Railroad, building off the Denver Pacific line, laid track to the new town of Erie, some 20 miles north of Denver, and stimulated renewed development of the Northern Coalfield. Production of the Boulder Valley Mine surged as it became Colorado's largest producer for a time, and overall the statewide coal industry grew strongly, based primarily on the renewed output from the field. Erie became the most important coal town in Colorado.

Pictured: The Garfield Mine #2, south of Erie closed in 1905 from the Lois Regnier Waneka collection. 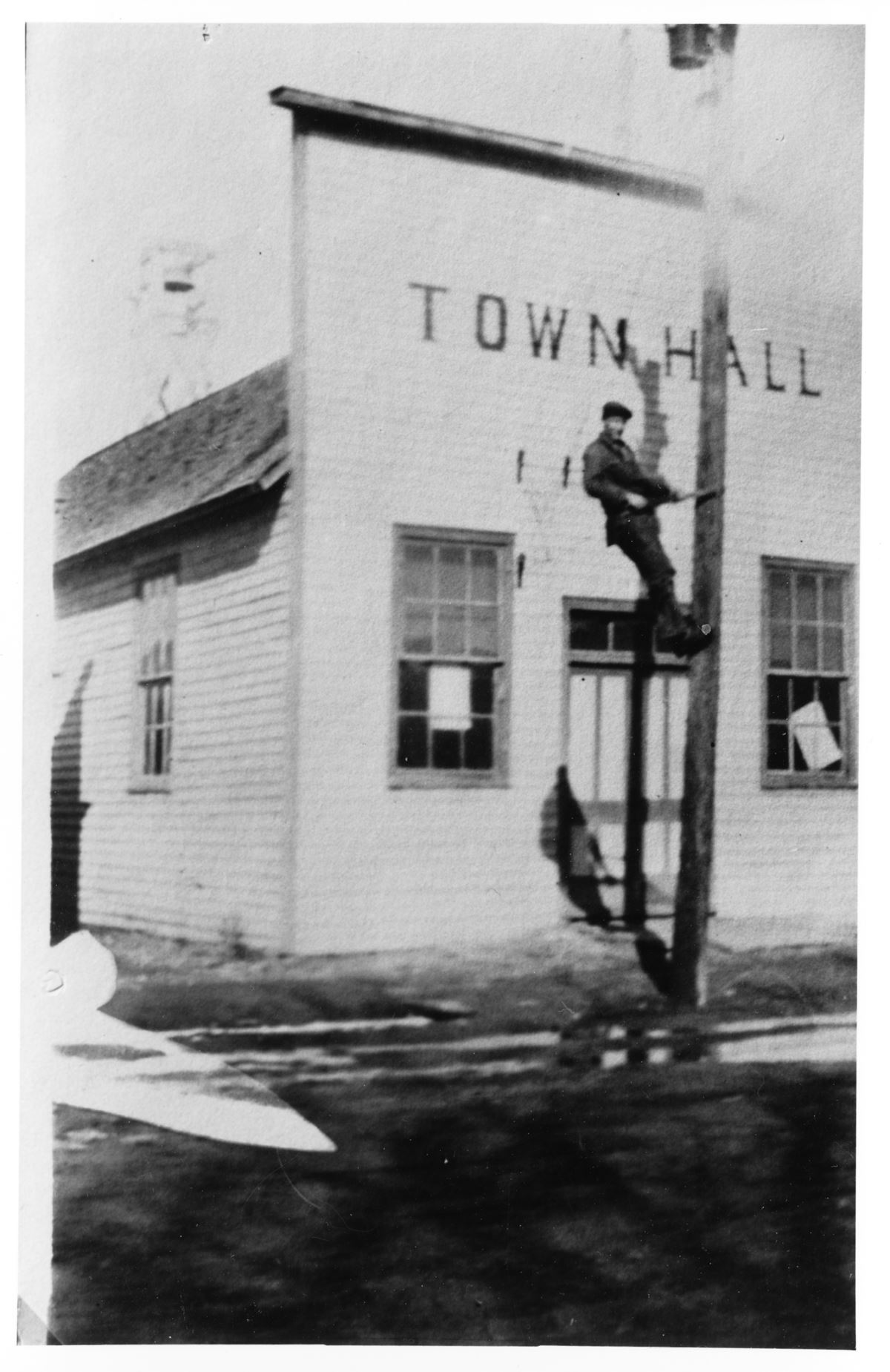 The Town of Erie was laid out and incorporated on November 16, 1874 (officers appointed in accordance to Territory of Colorado provisions for Town government). The first Mayor, then called the president of the Trustees, was George Meloor. Streets began to be named after prominent residents; Kattel, Briggs, Holbrook, Pierce, Moffat, and Cheesman.

At the time of incorporation in 1874, five temporary trustees governed the Town until a Mayor and city council were elected. Within a short time, Town business was being conducted in a new Town Hall, which doubled as a public meeting place and a classroom until the schoolhouse was built.

The old city hall building was renovated in 2005 and maintains continued visibility of use to the Town for occupation by the Erie Chamber of Commerce. 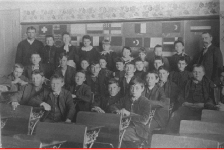 Erie's first school is established in 1874; 33 students enrolled. School was first held in the first Town Hall building (237 Wells Street) and in the 'Coffin' house at 525 Pierce Street.

Coal companies import 'summer miners' while regular workers were off for the summer working hard in metal mines in the mountains.

Erie has one doctor in Town.

In 1877, Coal miners strike in Erie. Explosives are set off in front of the Boulder Valley Mine and troops are brought in to maintain law and order. They build a six-sided fort on the hillside. The community enters in what is locally known as the 'Erie War'.

In 1878, the Knights of Labor Local #771, the first mining labor union in Colorado, chartered in Erie.

A narrow-gauge railroad was under construction to the coal fields of Canfield and Erie. The line ran until 1889. 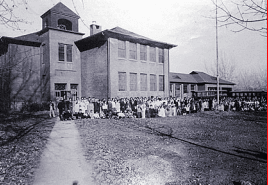 In 1881, Erie's first Lincoln School building, and second official school, is built at Holbrook and Wells Streets. The four-room frame accommodated more than 100 enrolled students. The four rooms consisted of a large room in the center with other rooms on the south, west, and east. When the number of students outgrew this building, some of the children again attended school in the “coffin” house. This frame building was moved from the Holbrook Street site so that a new larger school could be built.

In 1883, Erie's first church, Welsh Presbyterian Church, was built. Services were conducted in Welsh. Erie's first cemetery was near the old Presbyterian church; this cemetery was eventually relocated and there is debate regarding its actual location and whether all of the graves had been moved. Some thought it was on the site of the current Methodist Parsonage, however, the site was in the adjacent block to the south. Some thought it was relocated because of a local flood while others discount the flooding.

Erie's first newspaper, the Erie-Canfield Independent was founded in 1884 and published until 1896.

The Knights of Labor Agency calls the first strike in the Northern fields and miners vote to strike. 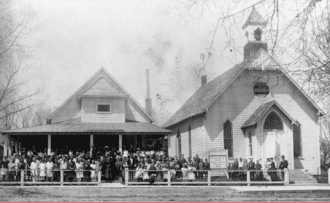 In 1888, the United Methodist Church is built and dedicated. The total cost was $1,475. The vacated Presbyterian Church has moved from across the street to become the Methodist Church's activity center. It later became the Town community center.

1890: A local flood devastates much of the Town of Erie.

1900: Three Webber brothers were killed in a mining accident that claimed more than 300 miners. A memorial to the Webbers was established in the Methodist Church.

1912: A gun battle in Lafayette, Colorado involves the miners.

1914: Ludlow, Colorado sees a gun battle waged and one soldier and four miners are killed. Later, 14 bodies are found at Ludlow. Federal troops are ordered into battle. Strikers finally swear peace. The Mine at Lafayette is burned.

President Wilson appoints a board to settle trouble in Colorado Strike Zone. The general strike is eventually declared over.

1921: Erie experiences the biggest flood in its history.

1922: Miners strike and the national guardsmen are called to active duty to subdue the strikers.

In 1926, the Klu Klux Klan marched into the Erie Methodist Church during a service led by Reverend W. J. Keeser. Keeser asked them to leave because they refused to remove their hoods. He asked them to leave a contribution on their way out of the building. A cross was burned on the hill east of Town, but nothing further developed. 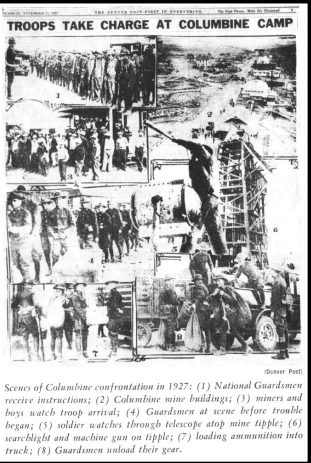 The coal industry was 'sick', and in an effort to meet financial obligations, coal owners cut wages. By 1927 miners were ready to strike again. The Industrial Workers of the World (IWW) organized a strike and soon had all mines in the state closed except the big Columbine Mine near Erie that was owned by the Rocky Mountain Fuel Company.

By mid-November 1927, it was cold and no coal was being mined for use by Valmont Power Plant, the University of Colorado, hospitals, railroads, businesses, and homes. The need for coal was critical. Miners were demonstrating at the Columbine Mine (with permission of the owners) and miners from Marshall joined the strike lines that marched through mine property every day.

Early on the morning of November 21, 1927, state police opened fire on the striking miners, killing six men, wounding thirteen miners, and injuring scores of individuals, including several women who were badly hurt. Martial law was declared in Colorado's northern coalfields. Miners gradually went back to work after losing this strike also.

In 1933 the National Industrial Recovery Act was passed, which automatically recognized unions in all United States coal mines. From that time on miners were allowed to join the United Mine Workers of America. 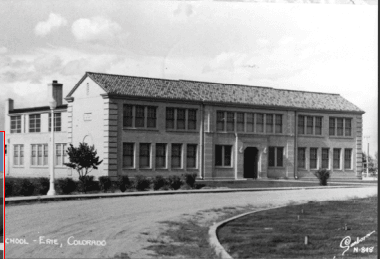 Wall Street 'lays an egg' leading to the Great Depression. Local mines experience a slow down, and residents live on extended credit from store owners. 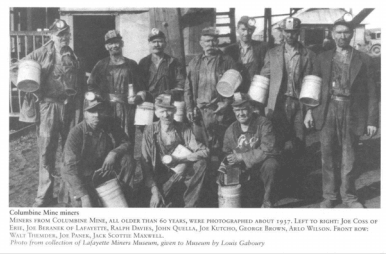 In 1930, Diphtheria epidemic hits the area.

In 1933, local coal mines reopened. Miners strike for better water and working conditions and mining accidents and deaths of miners were frequently experienced.

In 1935, the High School boys' basketball team plays in the State Tournament for the first time, but unfortunately lose.

In 1946, the Columbine Mine closes. The demand for coal is dropping nationwide.

In 1960, Coal Mines are no longer producing and are mostly closed around Erie.

The Erie Elementary School was built in 1966.

In 1972, Erie experiences a major flood. A dike around Town was constructed for Coal Creek.

In 1978, one of the last operating mines in the Erie area, the Eagle Mine, discontinues operations.

In 1979, The Erie Airpark subdivision is annexed into Erie as the first of many subdivisions. 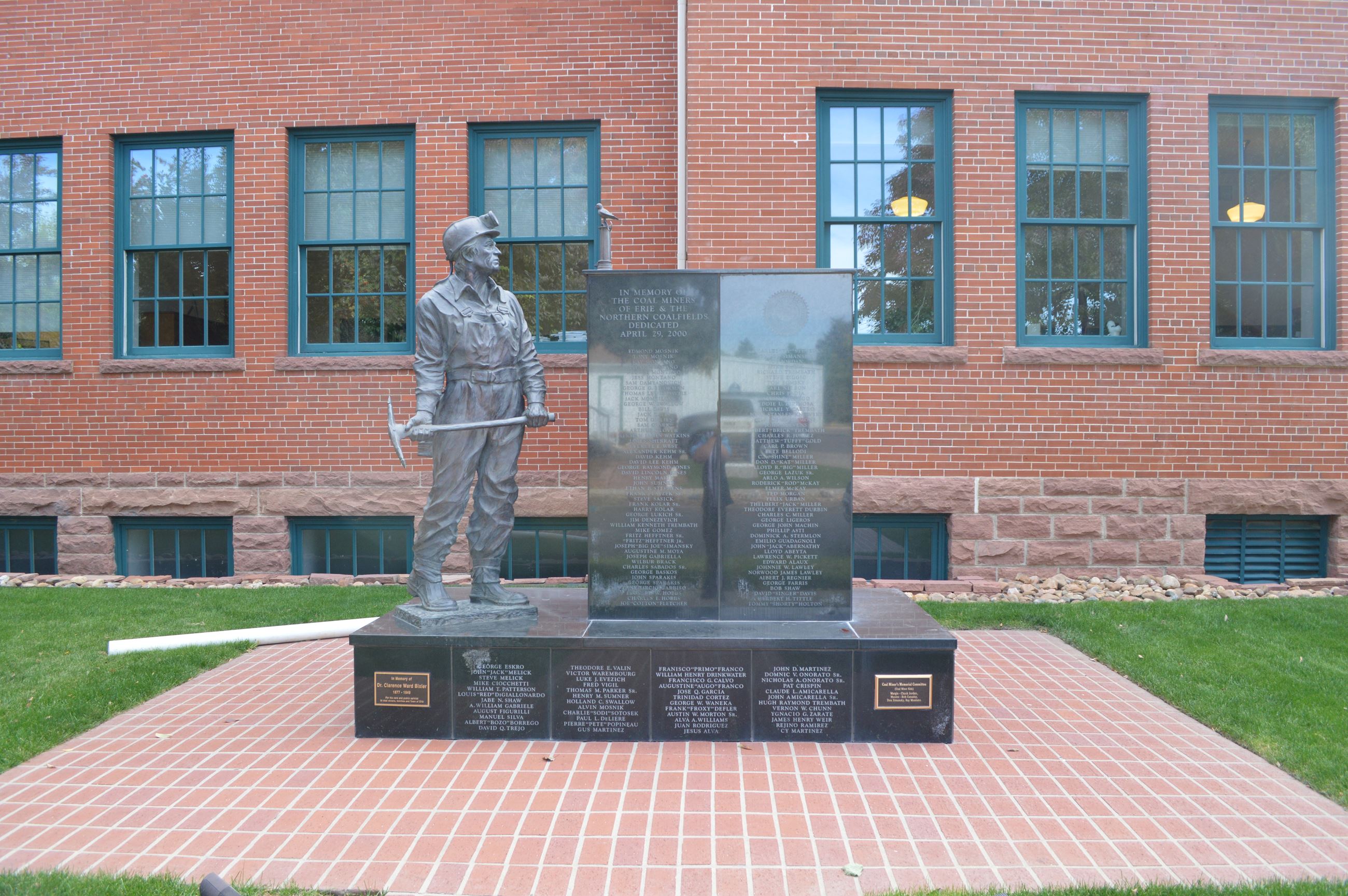 In 2000, Erie's street paving is completed and a Coal Miner Memorial was dedicated in front of Town Hall in memory of the Coal Miners of Erie and the Northern Coal fields. 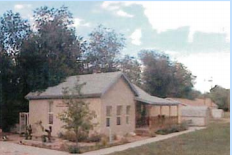 In 2001, Loraine Davis Children's Library opens and serves the children of Erie until 2008 when the Erie Community Library opens.

In 2005, Erie High School opens and is located on the northeast corner of Erie Parkway and County Line Road 5. 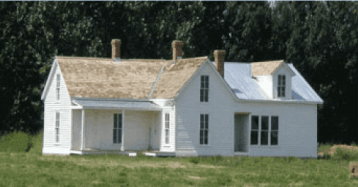 In July 2007, the Wise Homestead Museum opened to the public. The Erie Historical Society was founded in 1984 to preserve Erie's history. The Wise Homestead dates back to 1869, when Oliver Wise, his wife Adaline, and their three children came across the plains from Wisconsin to settle in Colorado.

In January 2008, the Erie Community Library, a full-service library for all ages, opened. The collection consisted of nearly 60,000 items (books, cassettes, CDs, and DVDs). 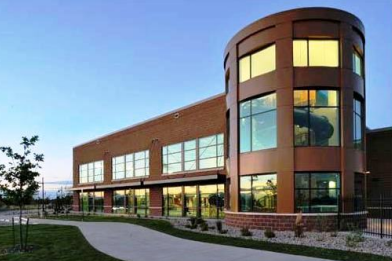 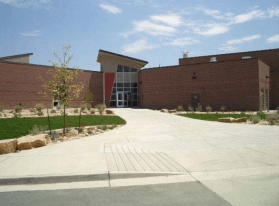 In 2008, Black Rock Elementary School opens in the Vista Ridge subdivision on Erie's southern side.