Owners of properties landmarked by the Town of Erie become eligible to apply for tax credits and/or Colorado Historic Preservation Fund grant money, may realize an increase in the value of your home and neighborhood, and can obtain official recognition that the property has special significance and is an important part of Erie's history. The best benefit of designation is that it protects the historic character of the property and the community. Historic Preservation is Sustainability.

Note: The external aspects of structures are the only elements preserved and protected by a Landmark Nomination. 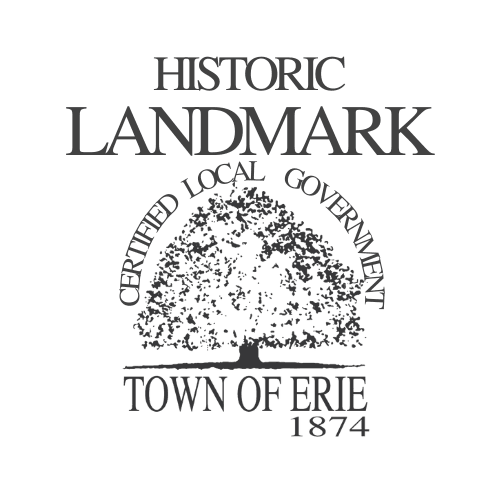 Has the property been surveyed?

Contact a member of the Erie Historic Preservation Advisory Board (EHPAB) to discover if the property being nominated has been previously surveyed.

Historic surveys are conducted by professional historians and historical architects contracted through matching grants with History Colorado. Final results are reviewed by History Colorado and the Erie Historic Preservation Advisory Board. Survey data is documented as part of the official History Colorado Architectural Inventory and determinations are made as to the property's official Local, State, or National historical register eligibility.

Submit the fillable Nomination Form, with a file upload of the historic property survey document.

Contact the Town Clerk's Office if you require a paper form.

After the nomination is received by the Town, it is routed to the Erie Historic Preservation Advisory Board (EHPAB). EHPAB will review the nomination within 45 days, and in no more than 15 days after its conclusion, must adopt findings and conclusions. Timelines may be extended, but only with the applicant's agreement.

The EHPAB submits a recommendation to the Board of Trustees to approve, modify, or disapprove the nomination. The EHPAB does not make the final decision on a nomination.

A Public Hearing will be held no more than 45 days after the EHPAB forwards its recommendation to the Board of Trustees.

A Public Hearing is an opportunity for the nominator to add any information, as well as to comment on the recommendations of the advisory board. Other persons could also be allowed to comment.

If the Board of Trustees designates the property as a historic landmark, this decision will be forwarded to the Town's Planning and Development Director.

The nominator will be officially notified and a copy of the decision is filed with either Boulder or Weld counties.