Emerald Ash Borer (EAB), Agrilus planipennis, is a small, green metallic beetle indigenous to Asia. It was discovered in North America in 2002 in southeastern Michigan and since has spread throughout 22 states, with Colorado as the western-most state where EAB has been positively confirmed. The EAB only attacks ash trees and all Fraxinus species are at risk from this pest. This destructive pest is responsible for the death of more than 50 million ash trees since its initial discovery and has already cost impacted communities billions of dollars for the treatment, removal, and replacement of ash trees. 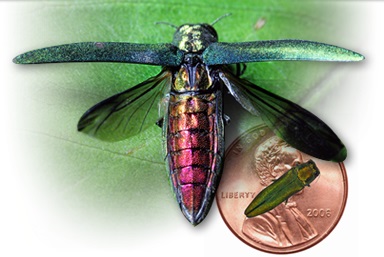 EAB was first confirmed in Colorado in 2013 in the City of Boulder. Since then, EAB has spread to other cities and towns on the Front Range.

Ash trees comprise an estimated 15% of the Town’s urban forest, or 11,000 ash trees. The loss of this species would have tremendous economic, social, and ecological impacts in the state and within Erie.

As of July 2021, State experts have confirmed the presence of emerald ash borer (EAB) – an invasive, highly destructive tree pest – in the Town of Erie.

A resident of Erie found an adult EAB on private property in the Historic Old Town area of Erie. Entomologists with the Colorado State Forest Service and Colorado State University confirmed the insect specimen as EAB. Infested trees were not found at the site were the EAB specimen was found. The specimen, however, confirms the presence of EAB within the town of Erie for the first time.

It is unknown whether EAB arrived in Erie by natural spread or via accidental human transport, such as in firewood or other raw ash material. Populations of the insect are capable of spreading a half-mile each year on their own, and Erie is adjacent to other municipalities with known EAB infestations.

The Town has participated in federally sponsored detection trapping for the last five years and will continue to utilize EAB traps to assist in the detection, delimitation, and survey of EAB populations in Erie.

The Towns goal is to prolong the life of the healthiest, largest, most significant ash trees in the community, and greatest producers of economic, social, and ecological benefits located on Town-maintained properties. The Town will employ a proactive, integrated strategy that utilizes the following management tools on Town-maintained properties: Active Monitoring, Selective Pesticide Treatment, Selective Ash Tree Removal, Ash Tree Replacement with Non-ash Species, and Communications and Public Awareness. The Town of Erie EAB Response Plan (PDF) details the management strategies to be utilized by the town to maintain ash trees located on public property.

Homeowners should identify any ash trees on their property and make a plan of action. There are two key options to consider:

How will you know if your ash tree is already infected?

The presence of EAB in a tree typically goes undetected until more than a year or two after initial infestation and is difficult to detect. Many symptoms of an EAB infestation are typical of other common ash problems, so please consult a professional to help you make a determination.

Symptoms of infested ash trees include:

If you think you have EAB in your ash trees, or if you have any questions or concerns, or would like additional information, please contact: